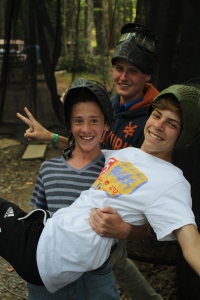 Gaga pit is an awesome game. A counselor throws a ball in the gaga pit and everybody shouts GA-GA-GA as the ball bounces and thus the game begins. The point of this game is to hit the ball with your hands and try to hit somebodies legs from their waist down to get them out. The last person standing wins. The materials needed are six picnic tables, a ball, and at least 10 people. Flip the picnic tables sideways into the shape of a hexagon to make the pit and start playing. HAVE FUN!

One of my favorite time of the day is swim time. We swim almost every day after lunch. My favorite thing to do is try to get Hiccup’s sunglasses which is so much fun. I usually swim for about an hour and a half. I also like to swim laps which is also fun. You should go to Camp Gilgal to swim and have lots of fun.

Last week’s parsha had Jacob getting married and having children and then subsequently fleeing from his father-in-law Laban. This week we see the next step in that journey. Jacob flees from one bad relationship (Laban) into another, with his brother Esau. In the midst of this transition he receives encouragement from God and a new name.

The parsha is called Vayishlach which means “and he sent” because Jacob sends his messengers ahead of him on his journey to alert Esau to his arrival. This is not necessarily a good situation. Jacob and Esau have the WORST sibling relationship–threatening to kill one another bad. But, Jacob has no where else to go. So, he returns with his family and his belongings to his brother Esau and painfully splits everything up and sends his family in two directions just in case Esau is coming to attack and destroy Jacob and his loved ones. And then, Jacob prays.

Then Jacob prayed, ‘O God of my father Abraham, God of my father Isaac, O Lord, who said to me, ‘Go back to your country and your relatives, and I will make you prosper;’ I am unworthy of all the kindness and faithfulness you have shown your servant. I had only my staff when I crossed this Jordan, but now I have become two groups. Save me, I pray, from the hand of my brother Esau, for I am afraid he will come and attack me, and also the mothers with their children. But you have said, ‘I will surely make you prosper and will make your descendants like the sand of the sea, which cannot be counted.

Not long after this prayer Jacob sends his family and the majority of his possessions to safety and then when he is alone something incredible happens. A man appears and begins wrestling with him through the night. This is a weird thing on its own, but the text also says that the wrestler touches Jacob’s hip and wrenches the socket. Still, Jacob continues to wrestle until the wrestler is willing to bless him. As a result he is blessed and given a new name. In verse 32:28 it says, ” Then the man said, ‘your name will no longer be Jacob, but Israel, because you have struggled with God and with men and have overcome.” Jacob leaves the wrestling match with a new name and a new limp and then goes on to meet his brother.

The interaction with Esau is overwhelming positive, especially compared to what it could have been. Jacob and his family settle in Bethel and God appears to him again and blesses him again in Chapter 35. God repeats Jacob’s new name and reaffirms the blessings and covenant promises that had been made already to Abraham and to Isaac before him. Jacob is blessed with another son, but loses his favorite wife in the process. At the conclusion of this parsha Isaac dies and we see further proof of the restored relationship between Jacob and Esau as they bury their father together.

God was faithful to his promises to Abraham, to Isaac, and to Jacob. God protected and preserved Jacob’s life, even when his life was in danger due to his own folly. God was with Jacob because of promises he had made to Abraham and he wasn’t going to abandon or forsake them. This is the same God that we know and serve. He is a God who is faithful to and through all generations. I hope that you will take time in this season of holidays and celebration to reflect with your family how God has proven himself faithful to you. 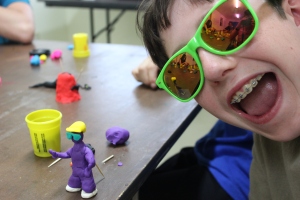 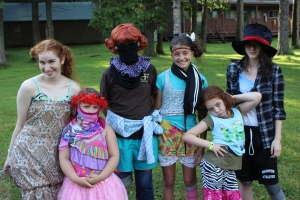 The tribe of Benjamin rocks. Our tribe includes 5 campers and 2 counselors. The tribe leaders are awesome. Elrond and Taco. Elrond is filled with fun and silliness and Taco is super strong, cool and kind but I’m sure he doesn’t taste like a taco. Or campers consist of Gavin, who is silly, Trent, who likes to sleep, Asher, who is always playing sports, Elliot, who likes playing games, and then there’s me and I’m sure I like everything about camp. We all eat a lot and like to crack jokes during FOB (Flat On Bunk.) we are all awesome and probably are coming back next year.

Hi we are the tribe of Reuben!

We have so much fun in the tribe of Reuben. We sing, dance, laugh, and make jokes! We love Camp Gilgal. We have to make a flag and our flag looks good. We have a flower with a Jewish star/Star of David in the middle of the flower and we all made our own flowers and wrote our names and we bring the flag to Breakfast, Dinner, and tabernacle. Tabernacle is when we sing about God and how wonderful he is and then Twister or Red Sox tells us a story in the Bible. The people in the tribe of Reuben are Eliana, Netanya, Alana, and Halie. The counselors are Ruski and Sitruce. They are great counselors.